Born in April 1660 in the north of Ireland of a Scots family, Hans Sloane moved to London at the age of 19 to train as an apothecary and physician. He travelled to France to learn more of medicine and botany and, after returning to London in 1684, worked with the physician Dr Thomas Sydenham (1624-1689) and was elected Fellow of the Royal Society, and of the Royal College of Physicians.

In 1687 Sloane travelled to the colony of Jamaica as physician to the new Governor of Jamaica, the Duke of Albemarle. The Duke died little more than a year later, prompting Sloane to return home to London. But his time abroad proved immensely productive. Sloane worked as a doctor on slave plantations and, with assistance from both English planters and enslaved West Africans – Akan men and women mainly from present-day Ghana and Cote d’Ivoire – assembled a collection of 800 plant specimens, as well as animals and curiosities. These would form the basis for his Catalogue of Jamaican Plants published in 1696 as well as his illustrated account A Voyage to the Islands Madera, Barbados, Nieves, S. Christophers and Jamaica, with the Natural History of the Herbs and Trees, Four-footed Beasts, Fishes, Birds, Insects, Reptiles of which volume one was published in 1707 and then volume two, in 1725. On returning from Jamaica, Sloane married Elizabeth Langley Rose, heiress to sugar plantations on the island, profits from which contributed substantially to Sloane’s ability to collect in subsequent decades.

Sloane would spend the rest of his life in London working as a physician and later becoming President of the Royal Society and Royal College of Physicians, the only person to have held both positions simultaneously. During his long life he also amassed an immense and diverse collection. This comprised over fifty thousand books and manuscripts and thirty-two thousand coins and medals, scientific instruments, antiquities and ethnographic artefacts, as well as fossils, shells, corals and animal parts. Sloane added to his collection in different ways, for example, by bequest of others such as William Courten (Charlton) (1642–1702) and by purchase of others, such as James Petiver (d.1718), and at auction, as well as by the donation of objects and artefact from friends, patients, colleagues, correspondents, traders and collectors alike.

Upon his death in 1753, Sloane willed that his books, manuscripts, prints, drawings, herbarium, coins, medals, antiquities and other treasures should be offered to the nation to be made available to the public for free. His collection was bought in its entirety by an Act of Parliament for £20,000 and the private libraries of the Cotton and Harley families were joined with Sloane’s and the old Royal Library, creating the British Museum — a nationally owned public repository not only for Sloane’s collection of natural and artificial rarities, but also for a national library, open and free to all. 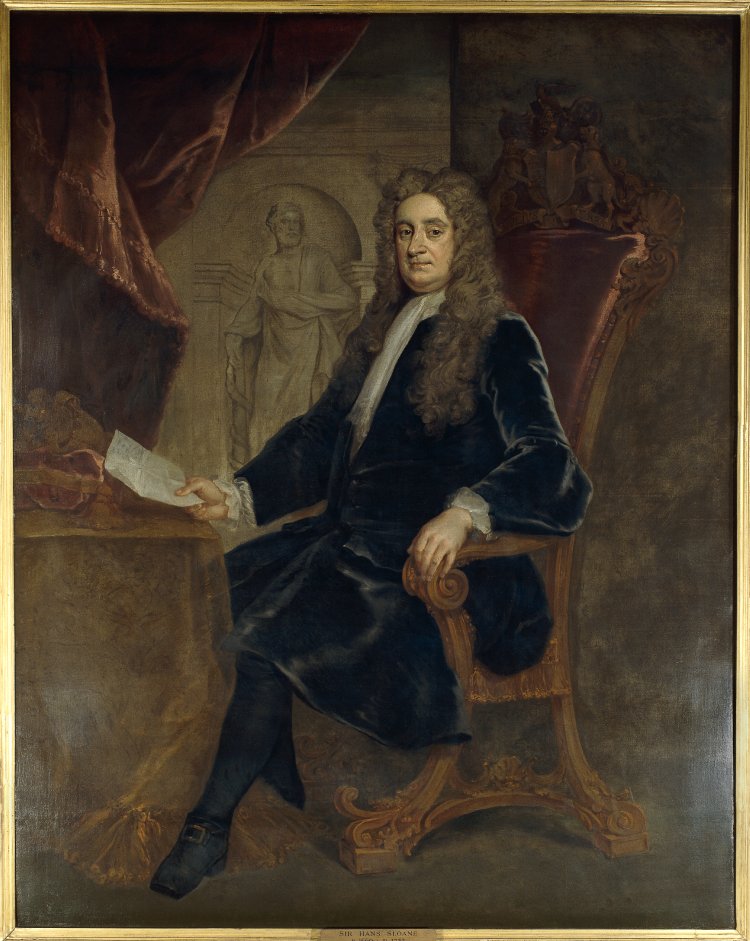